Dewalt products are one of the best power tools in the market today. They specialize in producing both cordless and corded power tools, and the good thing about them is that they built unique features for each of the devices they make. Their devices can be operated on batteries and still don’t offer less when it comes to performance and accuracy.

The time has come when everyone should turn to the cordless saw because you no longer need to worry about power supply when working in any job site. Inside this DEWALT DHS716AT2 FLEXVOLT Miter Saw review we’ll take a look at the saw and see why it stands as the best cordless miter saw and some of the features that set the tool apart from the rest.

We all know the benefits of using cordless tools, but the question is how long will the batteries last and can it deal with tough jobs more especially when you compare it with other power tools. The performance of DEWALT DHS716AT2 FLEXVOLT batteries is exceptional and it offers optimum performance.

In order to satisfy the need of their customer, the Dewalt brand makes the batteries so that they’re compatible with both 20 volts and 60/120 volts tools. With these batteries that come with the DEWALT DHS716AT2, you can power up your impact driver.

The batteries are designed to switch between voltages without causing any damage to your devices. The batteries can even be more efficient when working with devices that consume less energy because the battery saves more energy.

With a single charge, this DEWALT DHS716AT2  can perform about 289 crosscuts. And when you exhaust the batteries you can then connect to a power source to continue with your work. It has an AC adapter that allows you to connect to the power source if available. This means the DEWALT DHS716AT2  can serve as both cordless and corded saw.  Apart from its outstanding battery system, there are a lot of other features you’ll definitely like about the saw.

In the power tools industry, we all know Dewalt when it comes to producing power tools. The DEWALT DHS716AT2  isn’t an exceptional device. The tool is very powerful and can cut through any material with ease, it’s portable and very convenient to use. The AC adapter it comes with is very fast when it comes to charging lithium-ion batteries.

The DEWALT DHS716AT2 is the best of its kind; you hardly find a miter a saw that can match its features. The Flex Volt feature is one of the things that differentiate the tool from others. They have the ability to operate with or without a power source. 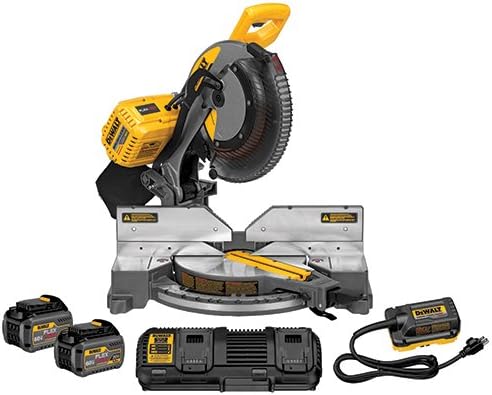 Despite being not a sliding miter saw, the DEWALT DHS716AT2 FLEXVOLT Miter Saw has an excellent cutting capacity than its competitors, it is capable of crosscutting dimensional 2 x 8 in one single pass. You can, however, use the back fence to cut extra 2-inches. It might take a few extra steps to do this, but it’s worth it since you can extend your crosscuts to 2 x 10 in one pass, instead of the 2 x 8”.

The DEWALT DHS716AT2 FLEXVOLT Miter Saw can cut 4×6 at 45 degrees in one single pass. This is possible to crosscut multiple boards easily. You should be careful though and make sure that you read the user manual carefully when using this feature.

If you work on trim molding you’ll definitely love this saw a lot. The DEWALT DHS716AT2 FLEXVOLT Miter Saw is capable of cutting a 6-1/2-inches board by placing it in the vertical position against the fence. This is perfect when it comes to making baseboard cuts. This tool is more convenient to use when making this kind of cut.

And as in the case of crown molding,  you can nest the material against the fence which is adjustable, and still continue with your compound cutting. All this is because the tool is versatile enough to deal with molding tasks and jobs that involve large crowns.

When it comes to making windows and door casing, this tool is very handy to work with. It has a lot of cross-cutting capabilities that are involved in window casings.

The DEWALT DHS716AT2 FLEXVOLT Miter Saw has a large dust collection port, this feature, however, isn’t appreciated by most people, but it’s still effective when it comes to collecting the dust generated when operating the device.

The DEWALT DHS716AT2 FLEXVOLT Miter Saw is designed to work in different working sites. The tool can be used as both cordless and corded saw. For anyone that moves from one job site to another will benefit a lot from this tool.

The power of the battery is really amazing because it can last longer than any other cordless device out there. Of course, when you’re using the batteries there is a limit to the cuts you can make, so you have to utilize your power wisely.

The blade positioning mechanism of this DEWALT DHS716AT2 FLEXVOLT Miter Saw is amazing because it’s integrated with it a cutline positioning system that allows the user to exactly place the blade on the cut lines, this will help anyone to achieve accurate and smooth cuts.

The device also comes with a miter detent plate that’s made from stainless steel. The miter has 11 detents; this will allow users to increase cutting capacity.

Who Should Buy The DEWALT DHS716AT2 FLEXVOLT Miter Saw?

The DEWALT DHS716AT2 is the perfect tool for professionals because of its cordless nature, ability to cut through large materials, use on trim molding, and powerful dust collection system. Anyone looking for simplicity and effectiveness in power tools will enjoy working with this Dewalt tool. It’s a good tool for anyone who specializes in making frames, molding, renovating, or deck building.

Generally speaking, most people love all the features of this tool. More especially if you’re the type that wants to work with cordless power tools you’ll love the powerful batteries that come with the tool. The DEWALT DHS716AT2 FLEXVOLT Miter Saw features a new innovative technology that has not been seen in the power tools industry.

The ease with which you can change the miter angle cannot be matched with other tools. With this tool by your side, you’ll be able to make precise and accurate angle cuts without facing any difficulty.

The DEWALT DHS716AT2 works better than other traditional miter saws. It offers optimum performance in a wide range of applications. You can use the tool to handle even the most complex tasks in the workshop or in any job site. It’s not really a lightweight device but most people love it as it is, the tool has received a lot of positive ratings and has been recommended by most of its users.